On the banks of the river Niger in a dusty suburb of Mali’s capital, Bamako, the SPANA Mali team often visit a busy square where animals and their owners wait for odd jobs transporting building materials around the city. On a recent visit Dr Amadou and his team were doing a check-up on a beautiful, white eight-year-old stallion named Dafijeh, meaning ‘white horse’ in the local Bambara language. The team noticed small lumps under the skin by the horse’s ears and around the salivary glands, and were concerned, especially considering Dafijeh’s relatively young age.

His owner, Kalifa, was worried about the discovery as Dafijeh is his main source of income, transporting sand, brick, iron and wood across Bamako to construct buildings. Kalifa,his wife and two young children live in the informal TSF-Sans Fil neighbourhood where poverty is rife.

This young family lives in conditions very similar to almost 70 per cent of the Malian population where many people earn less than a dollar per day. Without Dafijeh, Kalifa would struggle to make ends meet – that’s where SPANA steps in. The team gave Dafijeh a thorough examination and diagnosed the tumours as melanomas. They measured the tumours in order to monitor their development and take action if they become too large and become irritated by his harness.

‘Melanoma is a type of cancer which is most common in grey horses, and comes from the cells which produce skin pigment, called ‘melanin’. Luckily, its growth is usually very slow and rarely causes clinical problems.’ The team also checked Dafijeh’s hooves which get significant wear. He works more than seven hours every day, labouring under the intense sub-saharan sun.

Dr Amadou decided not to bring Dafijeh in for an operation as surgery was not a safe option due to the location of the tumour and associated risks of removal. But by closely monitoring the tumour on their frequent visits to the transport station, the team will be able to catch aggressive development and keep Dafijeh healthy and able to support his owner and dependant family.

Kalifa was visibly relieved by the team’s attention to his horse:

‘I’m happy that the SPANA team came to help and do the treatment. I understand I need to take good care of my horse and give him good rations to keep his body strong.’

The SPANA team’s frequent visits to working animals around Bamako ensure that the city’s working animals can continue to lead long and healthy lives while supporting individuals and communities. 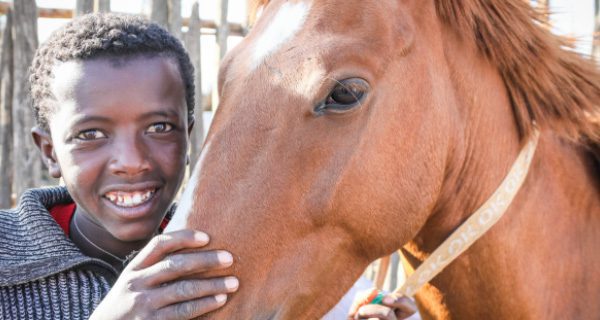