Mahdouda and her owner Hafid walk through the narrow streets of Douar Zenfara, Morocco every evening on their way home from the market. Carthorse Mahdouda, whose name means “Lucky” in Arabic, carries fruits and vegetables to town so Hafid can sell them to support his young family. Hafid, his wife and his six children know that Mahdouda is an essential part of the family.

Both horse and owner were turning a corner when suddenly, out of a nowhere, a speeding car ploughed in to them, throwing them both to the ground. Had the car been travelling any faster they might have been killed on the spot but, fortunately, Hafid escaped with only minor injuries. Mahdouda wasn’t as lucky. Although she was able to stand, it was clear that she had suffered serious injuries and needed help. Still in shock, Hajid rushed his mare to the closest SPANA centre in nearby Chemaia, where Dr Youness and his team immediately set to work on this emergency case. Mahdouda, although still stunned by the force of the impact, was in pain having suffered multiple cuts to her neck and left leg and a fracture to her jaw.

To ease her suffering, Dr Youness gave her painkillers, sedatives and antibiotics to fight any secondary infection. He recognised the serious state of the animal right away but wasn’t prepared to give up, saying, ‘…although the prognosis was poor, we did everything we could to save her.’

Her open wounds were disinfected and expertly sutured before her fractured bones were set in place. As the accident had resulted in very deep cuts, Dr Youness grafted skin to the worst of the wounds, a difficult procedure to perform on such a big animal.

As Mahdouda was unable to use her swollen and painful jaw until the bones had properly healed, Dr Youness gently fitted her with a nasogastric tube – a pliable tube fed through the nose into the stomach – so that she could be fed vital nutrients during her recovery period. The vet team then led the exhausted horse to a stall where she could rest in peace and quiet out of the hot sun for several weeks.

Had our vets not been on hand, it is very unlikely that Mahdouda would have survived her injuries. But with plenty of time to rest and the kindness of our SPANA team, Mahdouda recovered quickly and Hajid was delighted to be able to collect her from the centre and take her home.

SPANA’s vet team caught up with the resilient mare and owner one month after she was discharged and were impressed by her recovery. Dr Youness said, ‘All her wounds have completely recovered and are barely noticeable.’ I didn’t think my mare would survive that horrible accident. Without SPANA’s intervention, she surely would have died. Thank you SPANA for saving my precious mare. 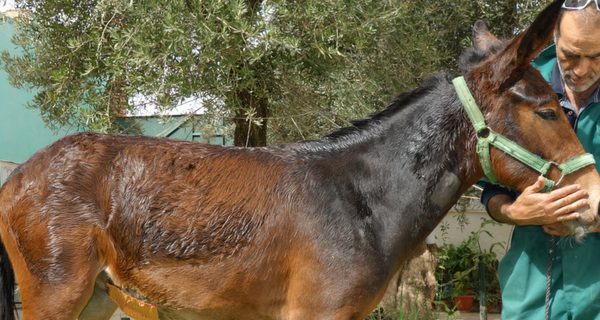